In a completely arbitrary manner (my notion that this could be any sort of valid test was thoroughly disabused by Obi), I decided to put the Slow Cooker to the test against the good old Oven Roast. 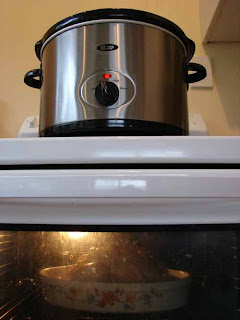 Well, I have to be honest. Chicken #1 was in the crockpot already when I learned that there were so many people coming to dinner that it would be a two-chicken night. So the second chicken had to be roasted, and the idea of the ultimate taste-test was a secondary consideration.

After the firewood was moved (a lot of firewood), I put on Chicken #2. Both were cooked, along with a tray of roast veges, some steamed veges, some fried veges, and some boiled carrots, just to make sure we had all our vege bases covered.

The chickens were dished and I asked that everyone take a piece of each and tell me which they preferred and why. In other words, who would win the Ultimate Chick Fight? Not unanimously but overwhelmingly (in an MMP Democracy), it was Chicken #2 that was described as moister and tastier, and everyone trying it assumed that it was the Slow Cooked Chook. It wasn't. Roast Chook won the Ultimate Chick Fight. 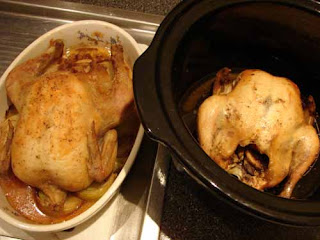 But here's the thing. Because Chicken #1 was still a teensy bit frozen, I put it on at 10, on high for 2 hours, before turning it down to low for a further 6. Also, it was a size 12, and Chicken #2 was a size 16. Chicken #2 was also a different brand from Chicken #1. So its possible that Chicken #1 got a wee bit overdone, and since its not fair to compare apples with pears, the entire debate is, as Obi has said, a load of...

Or so any statistician will tell you.

In any case, Chicken #1 carved much easier than Chicken #2. Dinner was delicious, and both chickens were enjoyed equally. I'm not sure that we proved anything, except that after two bottles of wine, all chicken is good.

But here's the final word: As you'll see below, I took Giffy's advice and put a whole apple in Chicken #2, which I think is the reason it came out so moist.

Dress the chicken with:
Freshly Ground Salt & Pepper
Olive Oil
Grated Garlic (about half a head)

Stuff the chicken with:
1 lemon, pierced all around
4-5 cloves of garlic, peeled and crushed

Cook in the slow cooker on low for 6-7 hours.

Stuff the chicken with:
1 apple, sliced into eighths

And for good measure, dress your tray of roast potatoes, kumera and onion with freshly ground salt and pepper, olive oil, dried mixed herbs, and gluten-free flour.
Posted by Dan at 7:00 AM

Woot! I can give successful cooking advice... who knew? I'm glad it worked out though ;)

Hey, full credit where its due!

Obi said, "The force was with you that night! Both chickens were great. Thanks for a delicious meal."