Its not a Slow Cooker Stew this time. I've not been 100% happy with my stew results in the Slow Cooker, although I've been stoked with Lamb Knuckles and Chicken. Today we had a bit of tenderised beef steak, and while this in not generally considered ideal for stewing, I was listening to the radio a couple of weeks back and listened in utter astonishment as Jeremy Jones provided a recipe for Beef Stroganoff made with fillet steak. That's just crazy! I thought. But in all fairness, if you have no time and plenty of money it sounds reasonable enough, and I haven't actually tried it myself. And since we had a frying steak on a stewy day (in more than one sense of the word) I decided I'd have a go at making a stew that might not need several hours cooking. Prep and cooking time was under 2 hours, and it probably could've been shorter.

You can find dhukka in middle eastern or Mediterranean groceries, or follow the link for a recipe that I haven't tried.If you're lucky enough to live in Wellington, Christchurch or Nelson, the Mediterranean Food Warehouse usually stocks a nice blend, along with lots of other goodies (not a sponsored plug!).

Finely chop half a head of garlic, 1 onion and 2 carrots. Heat some oil in a medium sized pot and soften these . Add 1/2t of blended curry powder to the veges and toss. When the curry has mixed through the veges, add about 3T of Cider Vinegar and reduce to a simmer for about 5 minutes.

Chop 600g of tenderised steak into chunks and season in a bowl with freshly ground salt and pepper, olive oil and a liberal coating of dhukka. 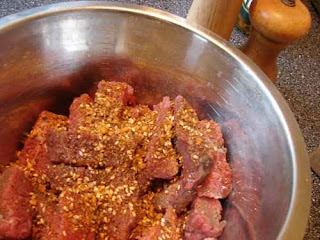 Stand aside. Remove the onion mixture from the pot and heat a bit more oil. When the oil is hot, brown off the meat in a couple of batches. When you've finished the meat, heat the pot again and deglaze with a mixture of about 1/8 Cup of balsamic vinegar and 1T of honey. Reduce the glaze by half, then return the meat to the pot. Toss well in the glaze, then return the onions to the pot. Mix well. Add a can of chopped tomatoes, bring to a gentle bubble and reduce to a gentle simmer for 1 to 1&1/2 hours. 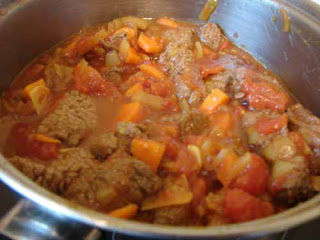 In the last half hour add some veges to the stew. Over a pot of boiling water, steam a few florets of brocolli and cauliflower. I did ours over a pot of kumera and lovely new potatoes bought fresh from the market on Saturday morning, boiled up with a sprig of mint out of the garden and some peeled lemon rind (thanks, lemon tree!). 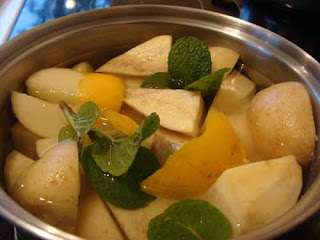 When the broco and cauli are hot, pop them in the stew and mix through. Then add 1/4 Cup of cream and stir through thoroughly. Increase the heat to reduce the stew a bit, allowing about 5 mins for the cream to thicken, and dish with the potatoes and kumera. Lovely stuff. 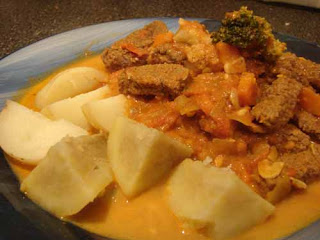