Things seem to have been a bit slow around here lately, and if you suspected that was because I had been abducted by aliens, you'd be wrong. *Phew!*

I've had my hands pretty full over the past few weeks, particularly with prepping and shooting another two days of The Winding City (which I've previously posted about here). We shot over the last two Sundays, and that doesn't leave much time on the weekend for the important stuff like hanging out with the family or posting to my blog.

I've also been making more of an effort to spend time writing fiction, which has meant that I haven't been allocating so much time to Freshly Ground. But the camera keeps coming out in both our kitchen and in the kitchens of unsuspecting friends and relatives. I have PILES of photos and recipes to get through, so hang in there.

We're also going to be away for a couple of weeks very soon, but I'll future-post a few items to cover that time, just for you.

Moving right along, we often have the discussion that it's just not worth buying takeout burgers because even the Big Guys (Like BK, McDs, and even Burger Fuel) can't make as good a burger as the ones we make at home. Then we sometimes have the discussion that even though we make great burgers at home, occasionally we don't have three hours to bake bread and half an hour to make fresh meat patties, fry them and grill them. But when we do, Oh Boy!! 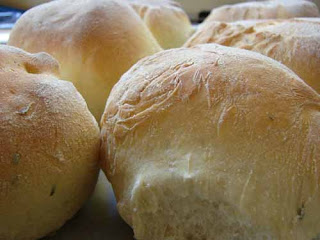 Firstly, put on some bread dough, using the same failsafe recipe that I use for my pizza bases and loaves of bread (it looks like I might've added some dried herbs to these ones too). Shape these into buns about half the size of your fist, set to rise for an hour and bake at 200C for 18 minutes. 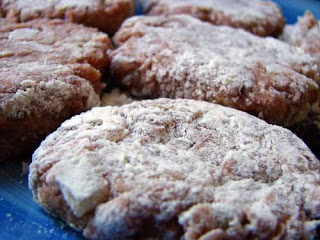 Shape into patties using a couple of spoons drenched in flour, and lay on a floured plate until you're ready to start cooking (for Gluten Free, use a GF baking mix for this step). 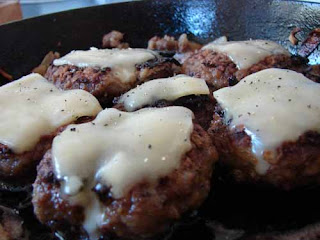 Fry the patties for about 10 mins on each side in hot rice bran oil, with a chopped onion cooking around the sides of the pan.

Place a slice of cheese on top of each patty for the last 8 mins of cooking, to melt. 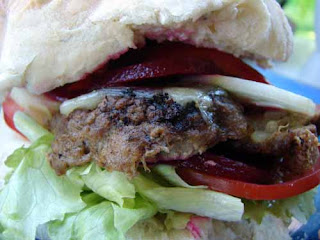 Slice the buns, butter and dress with mayonnaise, sauce, relish, sour cream, aioli, or whatever you prefer, and layer in lettuce, tomato slices, a beef patty, cucumber slices, and beetroot. And when you're done with that lot, ask yourself why you would ever want a Big Mac again.
Posted by Dan at 8:59 PM

I must say that home-made burger patties are the way to go. So much better than bought ones and really not much more effort.

The only real difference between your recipe and mine is that I don't normally put potato starch in (have been known to put breadcrumbs in) and do put in tomato sauce.

If only Beau hadn't given up meat for Lent. We're Ovo-piscerians until Easter. Has actually been awesome, we're trying lots of new recipes. I think I took photos of my lentil bolognaise. Must blog and also take more photos.

This is going to sound silly, but I use the potato starch to make the patties gluten free. I know, what's the point if you're going to put them in a bun made with wheat flour?

Well, it means that gluten-intolerants can have a nice big meat patty that they otherwise couldn't if it was made with flour or breadcrumbs, and if you have gluten-free bread or buns to go with it, then that's all the better.

I also often add garlic to the mix, and sometimes a squirt of BBQ sauce or steak sauce of the mixture is a bit dry for some reason. Even a tablespoon of condensed tomato paste can be good too.