Every day as I drive to work, the streetlights seem to be turning off closer and closer to home. So, either I'm running later every day, or the mornings are getting lighter earlier, which means that Spring's coming. But don't let it fool you, Winter is still here, and its not going without a fight. What that means for us, apart from the chopping and shifting of firewood and the mud on the carpet which that generates, is that its still very much stew season. I love stews. What I love even more about them now is getting all the ingredients ready the night before and coming home to the smell of cooking stew after work the following evening. Ah, Slow Cooker, how you've changed our lives.

Heat about 2t of olive oil in a pan. When it's quite hot, add the following to the pan: 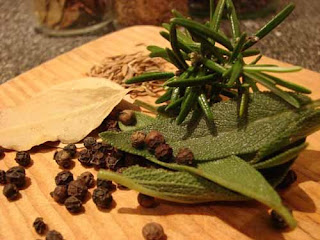 Fry lightly, filling the kitchen with all those lovely smells. This is really to open up all the flavours of the herbs and spices and release thier fragrances into the meat. 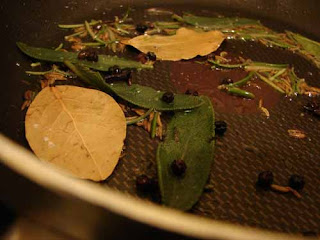 In a mixing bowl, blend 60ml of red wine with 60ml of dry white wine, 4 T Olive Oil, 2 T Honey and 1 T of paprika. When the spices have been frying for about 3-4 minutes (keep to a moderate heat, and be sure not to let it burn), add this to the wine and allow to steep for 10 minutes or so.

Roughly chop an onion and pop it in the pan on a low heat to absorb that flavoured oil. When the onion has just started to soften, place it in the bottom of the crockpot.

Meanwhile, cube a 600g piece of Skirt Steak or similar. Brush up a kumera and a couple of carrots. Leave the skins on these as you want them to hold together and release that lovely colour as they cook. Chop into roughly 2cm cubes and mix up with the onion in the crockpot. Open a tin of whole peeled tomatoes and mix these through the onions, mashing up the tomato as you do. Place 1/3 C of concentrated Chicken Stock or Beef Stock in the crockpot.

Note: To make Concentrated Chicken Stock, just put a normal pot of stock on the stove to simmer and then forget about it over a few wines and a movie. Then when you're ready to go to bed and you start wondering what that bubbling, tinkling noise is coming from the kitchen, you're most of the way there.

Place the meat in the wine marinade and mix through thoroughly. Leave in the fridge for at least a couple of hours, preferably overnight.

To cook, mix everything together in the crockpot and turn on, either on low for about 8 hours, or on High for 2 hours then down to low for a further 4 hours.

Mix up a bowl of Dumplings. Sift 1.25C of Flour, 1t Baking Powder, a pinch of salt and the other half of the Oxo Cube into a bowl. Add a shake of dried mixed herbs and 50g of butter, cubed. If you have a pastry blender, this is an easy way to crumble up the ingredients. If not, just rub it through your fingers until it feels like a light crumble. Then add milk or water a little at a time until the dough forms into a sticky mass. Roll into spoonfuls and place on top of the stew for the last 2 hours. 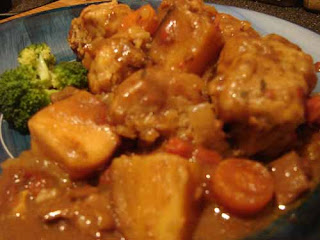 *grins* I'm seeing Morgue tonight and shall pass on the slow cooker love :)