Well, 8.30pm came and went, and the world did not end. As a mad sci-fi fan, I had sort of hoped in a dark and violent way that turning on the Particle Accelerator thingy at CERN might have in fact created a black hole and sucked the whole planet up, just to prove to those ever-so-sensible scientists that sometimes the crazy sci-fi writers can get it right. But they didn't. Oh well. Thankfully, courtesy of Morgue, we can all be kept fully up to date on these developments. If you're at all worried about whether or not the world has been consumed by a greedy man-made black hole, just check this link.

Or take a look out the window. If you still have a window, then its probably OK.

So, even though it would seem that our planet is not on the verge of calling "it's a wrap", that's exactly what I'm going to do. Still playing catch-up from dinners a week or so ago, here's a quick and healthy favourite from our chemical fusion chamber (read: kitchen) to yours.

Couldn't be easier. In a pan, fry up a chopped onion and a few sliced garlic cloves, then add about 400g of mince (ground beef, for my growing audience across the Pacific). Brown the mince and add some soy sauce, freshly ground salt and pepper, about 3T of tomato sauce (ketchup), and cook until the mince holds together.

Meanwhile, grate a carrot, some cheese, dice a couple of tomatoes, and finely slice some capsicum (peppers). 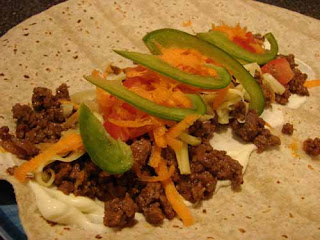 Warm a couple of wraps in the microwave (20s on medium - you don't want them to get hot or they'll fall apart) and lay each on a plate. Spread about 1/3 of each wrap with sour cream and chilli sauce, or tomato sauce, or aioli, or chutney, or whatever you like. Spoon the mince onto the sour cream and spread your salad on top. Fold up the bottom section and bring the sides over to form a nice burrito shape. Eat immediately. 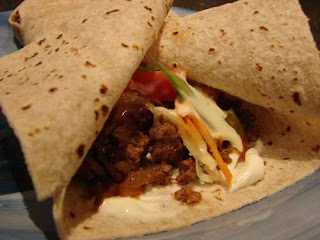 Another option which we have really enjoyed is to slow-cook a chicken and shred the meat instead of cooking mince (that's for you, Patrice). Give it a try, you crock-pot fiends out there.
Posted by Dan at 9:00 PM