Firstly, my little Statcounter tells me that yesterday I passed the "1000 views" mark on Freshly Ground. Cripes. Thanks very much for the support, everyone. It keeps me coming back, probably when I should be doing more practical things. But that's another issue which I might take up later. If you're lucky.

Moving right along, yesterday was Dessert Chef C's birthday. It was her request that we have pizza for dinner for her birthday, and I was most happy to oblige. Aunty A and Uncle I came over again, as did Liz E Bear. Uncle I brought the next step up in the beer department, this time a Trappiste Dubbel That went down very well indeed. 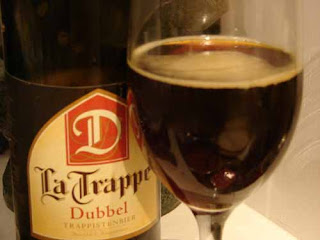 We've been making individual pizzas instead of big ones lately, just for a change. All was going well last night until I had the third round in the oven and I went to prep a couple more, and I found that the bases I had so carefully pre-rolled by hand had all decided to merge back together in a glutinous mass. So you learn things. A pizza takes 15 minutes to cook, but only 2 minutes to roll out the base and only a couple of minutes to dress. Next time I won't give myself a back-ache rolling out 15 bases at once, only to have them fall in love again and enjoy a little family reunion once my back is turned. Instead I'll keep the dough in balls and press each one out as it's needed.

I did pretty well at saving them from complete disaster - theoretically at least. When we were done eating, I took all the leftover toppings and sauce and spread them down the middle of the merged bases and rolled them all together. I grated parmesan over the top and baked it, and what I got out of the oven after 22mins looked absolutely divine. 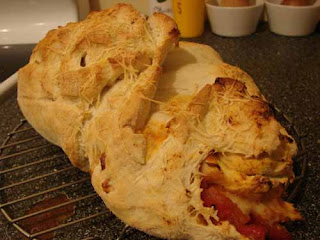 Unfortunately, I had put in the last of the chicken, and because we care about our health, and no-one was still hungry, we had to put it out for the birds (and the cats, and the hedgehogs, and the worms...). Which raised a discussion about wasting food (which I deplore, as you will know), to which I argued that feeding the birds was not a waste of food at all. Certainly not an ideal use, but definitely not a waste.

Anyway, the star performers on the pizza front for the last two weeks have been a classic Chicken, Camembert and Cranberry, which I made last night for C and Liz E Bear; and my current favourite pizza of all time: Chilli Mussels. I've only ever seen seafood pizza done as if it might be your last chance to ever eat shellfish. These pizzas are laden with shrimps, mussels, fish, squid rings, surimi, and whatever else some crazed pizza chef thinks will be required for a customer to buy a seafood pizza and feel like they're getting thier money's worth. Well, the old quality versus quantity argument wins again, hands (or fins) down.

If you like seafood and you like spicy, this is the one for you. If you don't, like our birthday girl, stick to chicken and cranberry or salami and cheese. As for me, I now have a reason to make sure that there are always mussels in the fridge...

Place 3 plain marinated mussels per pizza you intend to make (single serve pizza, that is) in a bowl. Add in the grated zest of 1/4 lemon, 2T of Sweet Thai Chilli Sauce and 1 finely sliced clove of NZ garlic per 3 mussels, and add a generous seasoning of freshly ground black pepper. Allow to marinate, stirring occasionally, while the dough is made.

Make up 1 quantity of pizza/bread dough.

Take 1 serving of Top Secret Pizza Sauce and warm in a small pot on the stove. (Yes, you might've been LYAO when you read that post, but this stuff is fantastic. Sure, it could be better, and perhaps I could've created less of a fire hazard in the process, but it has turned out to be a brilliant base for pasta or pizza sauce. I used the last of it yesterday and I'm a bit upset about that.) Next, finely chop a ripe tomato and half an onion and add to the pot. Squirt in 1T of tomato paste and 1T of tomato sauce and heat. Allow to simmer vigourously without boiling for about 5 mins, then blitz with a stick blender or in a bench blender. Put aside.

When the dough is done, divide into six balls.

Preheat the oven to 230C, with your pizza stone on the centre rack. You want the pizza stone to be piping hot every time you start a new round of pizzas, so pop the stone back in the oven between sessions. You won't regret it.

Roll a ball of dough out flat on a floured bench, using your hands to press the dough out towards the edges. I use Semonlina flour as it doesn't dry the dough out. 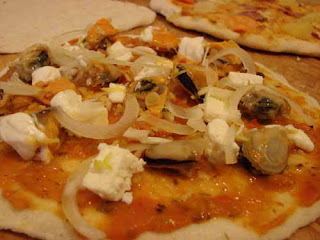 Brush a drizzle of olive oil over the base, followed by about 2T of Pizza Sauce. Slice the mussels into thirds and place around the pizza, then drizzle on some of the marinade. Finely slice 1 clove of NZ garlic and sprinkle on, along with a scattering of finely sliced onion. Add a few small blocks of feta cheese, then grate over lemon zest and add a grind of pepper. Dress with a small handful of mozzarella cheese, followed by a little grating of edam cheese, and a shaving of fresh parmesan. 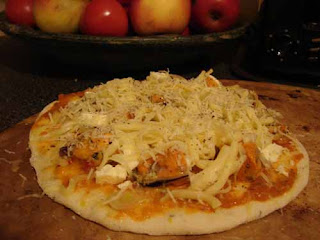 Pull the hot pizza stone from the oven and slide the pizza onto it. I cook 2 of this size at a time. Listen for that satisfying sizzle that tells you your base is guaranteed to go crispy. Bake for 15 mins. If your oven doesn't have a pizza setting, then flick the dial over to grill for about another 3-5 minutes until the cheese browns. Remove (carefully!) from the oven and slice, then dish. 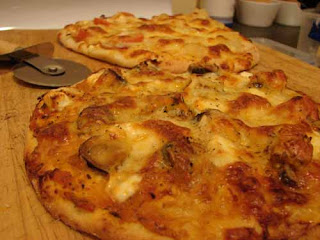 Enjoy with a dash of good Pinot Gris. You have to admit, its not often that you can match wine with pizza, can you?

Some of the keen-eyed among you will notice that the pizza on the final picture seems to have capsicum on it. That is indeed the case. In fact, it also has pepperoni and absolutely no mussels - those things that look like they might be mussels are actually mushrooms. It seems that the mussel pizza was too good to hang around long enough for a photo to be taken, so the plain old "supremo" will have to stand in as best it can.

I enjoy chilli and mussels! Looks like a perfect pizza for me. As you say though, many people don't, so single serve seems the way to go :)

Why did you not save the chicken pizza roll thing to eat for lunch the next day?

I'm paranoid about leftover chicken. I bought cooked chicken cold from the supermarket for this meal and so once it had been in the oven to bake the dough it had been reheated.

If I had cooked the meat from fresh and it had gone into the oven hot I would've had no problem keeping it til the next day, but chicken that has been cooked and cooled and reheated and cooled is a recipe for food poisoning. I've had campylobacter in the past and its not fun, and that was definitely attributable to chicken.

So I don't take any chances.

If I'd not had 3 beers and 2 wines by the time I came to deal with the leftovers I probably would have thought to leave the chicken out and just make it a savoury roll, which would've been yummy the next day. Trappiste Dubbel has a lot to answer for!