Last Friday was Uncle I's birthday, so we decided - based on the noonday almost-spring sunshine - that we might have a BBQ. Ah, folly. By 5pm it was cold and blowing, threatening rain, and what made it worse was that lo and behold, there was no gas for the BBQ anyway. So we used the electric BBQ instead, and it was great.

The biggest problem I usually have with BBQs (besides the occasional hangover) is dealing with the leftovers. In the past I've been guilty of cooking too much, which leaves us with more meat sitting in the fridge than we're able to eat in a week, so it ends up getting thrown out. I'll be making a serious effort, in line with my wider concerns regarding food wastage, to reduce that excess this summer. I think we managed that with Friday's meal, the highlight of which was the garlic steak and the Squashed Potatoes - I'll post that next.

Meanwhile, Saturday morning dawned and there was a tray of leftover steak and sausages in the fridge which I decided would not be wasted. Bring on the... 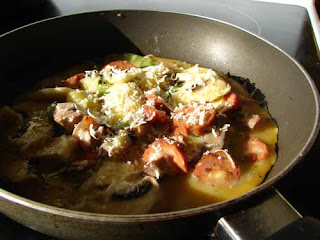 Slice up leftover BBQ meat: we had steak and chorizo. Toss a handful in a bowl with an egg, some chopped mushroom and capsicum, a grating of parmesan and some freshly ground salt and pepper. Heat some olive oil in a non-stick pan and add the egg mixture. When its browned on the underside, slide the fritatta out onto a plate, flip the pan on top of the uncooked side of the fritatta and invert the whole caboodle (with a tea towel or two). Pop the pan back on the heat and cook through. 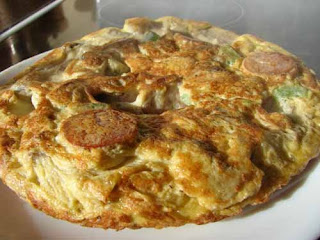 Serve with sweet chilli sauce or whatever brightens up your post-BBQ Saturday morning. Hot coffee also highly recommended.
Posted by Dan at 9:21 PM