Oh yes. Jack Frost has been about, and the wind is now blowing cold from the north as well as the south.

After a week that has ranged from the mildly annoying to the downright depressing, it's finally the weekend again. We missed our trip to the market last week due to being in the South Island, but we braved the cold and the wind to get down there this morning. The sun came out and it was a clear crisp day at the riverbank with bargains to be found. We spent about $30, and the vege crisper, fruitbowl, and the cupboard where the onions, potatoes and kumaras live are all overflowing. 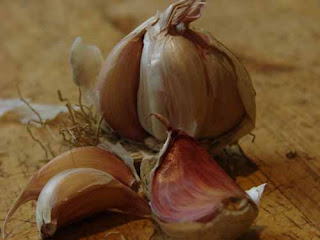 A quick word about garlic. Without any suggestion of xenophobia, I really have to recommend that you (assuming you're in NZ - if not, replace "NZ" with "local" just to make the same points) buy NZ garlic if you can find it. Most of what we get in the stores is grown overseas, particularly in China, and you'll see it in those jammed plastic mesh bags in the supermarket for bargain prices. NZ garlic is more expensive than the mass imported stuff you can get, but it has a much shorter drive to the market. Besides the reduced carbon footprint of buying local produce and the way that local stuff tends to taste better, we have stringent quality controls in place in NZ to regulate the quality of the soil that our food is grown in. But my main issue with the chinese garlic we have here is that by the time is gets to us, most of it is going green in the middle, and these bits have to be cut out, and the cloves are usually a bit rubbery. For the sake of knowing that you're eating a quality product that you can use completely and has been grown in good soil without having been shipped across an ocean to reach you, look out for NZ garlic.

Cube about 400g of stewing steak (to serve 2 adults, 1 toddler and to leave enough for one lunch) 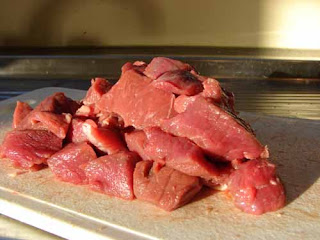 Finely slice a small head of garlic
Deseed and finely slice one small red chilli (You can up this amount if you are a chilli fiend - I went on the awfully mild side because my lovely wife is a chilliphobe and I thought I should be careful not to burn Isaac's mouth or else he might never eat chilli anything again!)
Grate the zest from half a lime. Combine all the above in a metal bowl. Add the juice of half a lime, a big swig of soy sauce, some freshly ground pepper, a splash of olive oil, and a T of brown sugar. Put aside to marinade for at least half an hour. 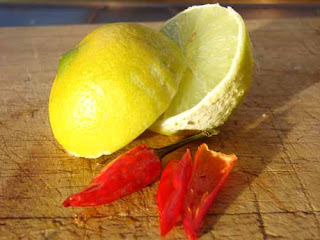 Heat some oil (I use Rice Bran Oil for my basic cooking) in a heavy pan and start frying up the fat you've removed from the meat. This is just to get the flavour of the meat into the onion base. While you can eat this cooked fat, I don't recommend it. It might seem crunchy and nice at first, but it doesn't go down quite the same as crackling. 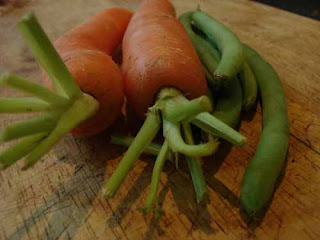 Normally I would make a base for the stew of onions and carrots, but our visit to the market today convinced me to deviate from this plan ever so slightly. We got some lovely carrots with the tops still on, which I couldn't bear to chop up, and we got some really cheap tomatoes, some of which were on the way out. 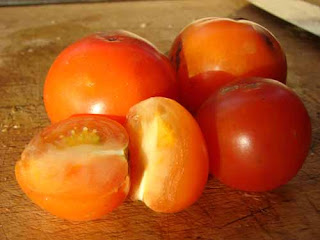 Roughly chop one large onion and four overripe tomatoes. Remove the beef fat from the pan, cook the onions and tomatoes until softened (about 7 minutes) and then place in an oven dish that has a lid. Add a little extra oil to loosen up the pan, get the oil very hot, then add the meat. As liquid runs off the meat into the pan, drain through a sieve back into the metal bowl, and tap any solid flavour in the sieve back into the pan. Repeat this until the meat is able to brown nicely, probably about 3 times. Into the metal bowl with the juices, add a cup of hot water and half an Oxo Beef Stock Cube. If you have a cup of beef stock, this will do the trick as well. Stand this by. 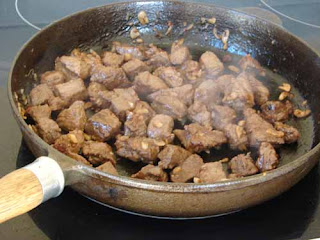 When the meat is brown all over and just starting to crisp, remove from the pan into the oven dish with the onions. Heat the pan again and add about 1/4 Cup of Red Wine. Use a spatula to stir up all the residual flavours from the pan, then add the stock mixture. Allow this to reduce. Mix up 1t of cornflour in 1/2 a Cup of cold water and add gradually. You may not need to put all the cornflour mixture in, just judge it as you go. Continue to reduce the gravy, allowing it to thicken, until its about the consistency of cream. 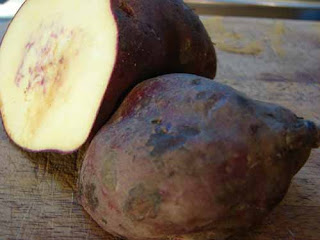 Peel and chop a kumara into bite-size pieces. Pour the gravy into the oven dish and add in the kumara. Combine all and place in the oven, covered. Cook at 210c for 25mins, then reduce to 190c for a further 1 1/2 hrs. 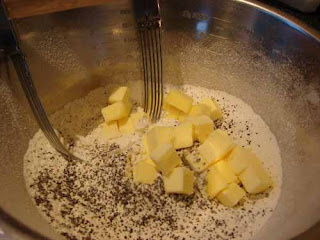 Meanwhile, get your dumplings ready. This comes pretty much straight from the Edmonds CookBook, so if you don't have this fine kitchen manual, I strongly suggest you find a copy. Sift 1.25C of Flour, 1t Baking Powder, a pinch of salt and the other half of the Oxo Cube into a bowl. Add a shake of dried mixed herbs and 50g of butter, cubed. If you have a pastry blender, this is an easy way to crumble up the ingredients. If not, just rub it through your fingers until it feels like a light crumble. Then add milk or water a little at a time until the dough forms into a sticky mass. 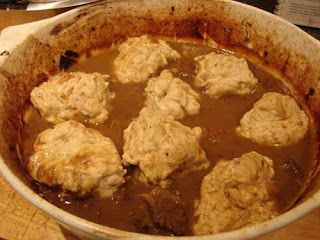 The stew should cook for 2 hours, and the dumplings should go in for the last half hour. Get the stew out of the oven. If it seems a little dry, add a splash of hot water over the top. Spoon the dumpling dough over the stew in balls, replace the lid and return to the oven for the final half hour. 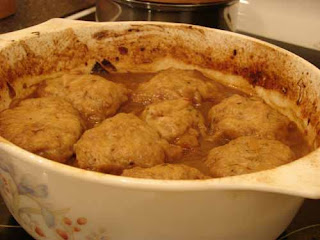 For the veges tonight, I sliced the carrots lengthwise so that they still felt all rural what with their tops on and all. I steamed them for about 10 minutes and put the fresh green beans into the steamer for the last 2 minutes. Crunchy fresh veges with tender beef and chewy dumplings! With the fire going and the rain walking down the windows, it was a great night to be inside.
Posted by Dan at 4:44 PM

I love stew and dumplings. Esp as can be made in slowcooker during the day so that I can make/put dumplings on as soon as I get home and then eat in 30min! When everyone in your household is working 9-5 (or variants around that) you can't take 2+hours to make dinner. Sadness.

Go the slow cooker! Usually our special long-cook dinners are reserved for the weekends. Dinner during the week tends to be simpler and faster, as I don't get home til about 5 as well, and we like to eat by about 6 or 6.30. I'm prepping my next post which is about making a quick meal out of leftover roast lamb on a weeknight...

I've heard about this so called "leftover" roast lamb, but have never seen the elusive creature ;)

Apparently it makes the best shepherd's pie, but I'm too lazy for that.

I am totally trying to indoctrinate you in the ways of the slowcooker ;) I left mine with some friends while Beau and I are in Ireland and I have been informed that I shall not be getting it back. They will buy me a new one if necessary!

I made this stew on Sunday, and boy was it yummy. I used lemon instead of lime, and stewed tomatoes from last summer (frozen), as I didn't have any fresh ones. I marinated it all day, and made dumplings for the very first time that I can remember. Then I had leftovers for lunch the next day and we finished it for dinner last night. Of course, we don't have kumara up here, so I used sweet potato, and as with most everything, game meat instead of beef. Next time, I think I'll do it in the slow cooker.