This meal is all about economy, and rides on the back of the Roast Chicken Amazing Multiple Meal Deal. Since the oven's already going, there's no point wasting all that good energy on just one meal. This recipe tends to make two big lunch servings, which I usually take to work with a bit of toast bread. I also reserve the breasts for a second meal, which makes a chicken go an awfully long way. It also makes an extra half-litre of stock that you can put aside for something else in the future, instead of resorting to powdered ingredients.

Since I stuck with a regular cordon bleu treatment for the chook (salt and pepper on the outside, one skewered lemon and 4 peeled garlic cloves stuffed in the cavity), I could spend some time seasoning the veges nicely. I went with freshly ground salt & pepper, lemon zest, paprika, finely chopped rosemary and grated garlic. This adds something special to both the roast and the soup.

Chop up and roast a whole pumpkin as part of a roast dinner. I know that I will only need to serve about a quarter of it for dinner, which leaves the rest for soup. Boil up a stock from the chicken back and neck after it has roasted, along with all the scraps from prepping the veges, plus an extra onion and maybe a potato. Generally there's enough in the way of peelings and stuff to make about a litre of stock.

Simmer this away on the back of the stove while watching Sunday night TV, then strain it into a bowl and pop it in the fridge for 1/2 an hour to allow some of the fat to separate off the liquid.

Scrape the pumpkin off its skin and chop up whatever leftover veges you have - usually some potato, kumera, and onion, and place them all in another bowl. Add about 400ml of stock and puree up with a hand blender, until it reaches a thick and smooth consistency with some chunky bits. 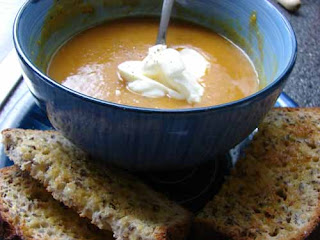 Today I was home on "looking-after-the-sick-family-sick-leave", and had some for lunch, with a big dollop of sour cream. Delicious, and just what I felt like on a cold and rainy day.

Tonight I'll be Making the Most of the Roast again, using the breasts from last night's chook to make a coconut and banana curry. I'll let you know how it turns out!
Posted by Dan at 4:17 PM