This is a great meal when they've got the Silverside piled up in the meat aisle for $5-7 a cut. One of these will usually do us two dinners, plus sandwiches for a week (or at least a couple of days).

I'm pretty sure that this is how my Mum likes to cook a Corned Beef, and although I may have taken a few liberties here and there, the basic principle remains the same. The kicker for this, however, is the mustard sauce, which I have only just started making, and comes straight from the Edmonds Cookbook, modified here slightly for quantity's and copyright's sake. I halved the recipe because it makes heaps, but I'll post the whole recipe and you can make that call yourself. Half the recipe made enough for both Sunday night's dinner and Monday's rehash of the leftovers (which I'll post later), but I'm the only mustard freak in the house, so it didn't have to go far.

I cooked up a tray of roast veges and a steamer of broccoli, cauli, and carrots, as per usual, to accompany the meat.

Pop the Beef into a large pot. Add a large chopped onion, a large chopped carrot, a sprinkle of peppercorns and a couple of bayleaves, as well as a large spoonful of honey. Cover with water. 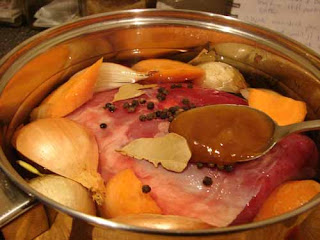 Bring to the boil, allow to cook vigorously for about 15 mins, then turn down to a simmer for a further hour. After an hour, boil the jug. When the jug is hot, remove the pot from the heat and strain the liquid and extras from the meat, reserving at least a cup of the liquid. Replace the meat into the pot with hot water from the jug and return to the stove, bringing the pot back to a simmer. Cook for another 45 mins - 1 hour (the longer you can cook it for, the more the meat will be falling apart).
After this time, remove the meat to a cutting board and allow to stand for about 10 mins before carving. 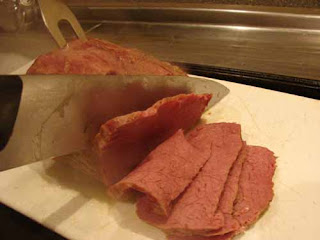 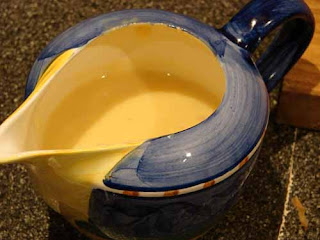 In a small pot, blend up 1 egg with 1/4 cup of sugar. Add to this 1 T of flour, 1 t mustard powder, and freshly ground salt and pepper. Gradually stir in 1 cup of the reserved water from the meat and 1/4 cup of cider vinegar. Cook over a low heat until the sauce thickens. 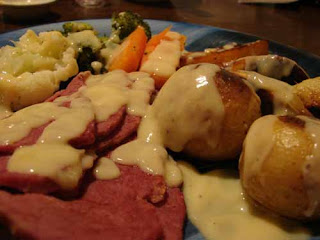 I love corned beef. It's easy and tasty (and also slow cookerable). My beau doesn't like it hot much, although he loves having it cold in sandwiches... go figure.

Did you "rinse" the beef first?

I never rinse it, I've never even thought of doing that. What's the idea behind it? Changing the water and discarding the onion and carrot seems to bet rid of the excess salt in the meat which is the main issue with corned beef.

Hey Dan
I've just read your recipe for "Mum's Corned Beef" and was rather intrigued because you made it THE EXACT OPPOSITE to how I make it. I boil it first, THEN add the carrots, onion, bayleaf and I always use vinegar and golden syrup. But yours sounds yummy and looked real good. I'll have to give it a go - pity to waste the carrots and onions, though.
Love you
Mum

But... the onion and carrot taste so good! I sometimes rinse and sometimes don't depending on how I feel and time allowances, otherwise, i think I make it like your mum! Vinegar, golden syrup, peppercorns and a bayleaf. Onions and carrot after boiling and you get to eat their tasty saltiness!

I assume the rinsing is to get rid of salt. I think that's even an instruction in the Edmond's recipe.

Corned Beef is seriously easy and good in the slow cooker btw.