About 10 years ago, I started a project called Urban Driftwood. It began as a collection of writing, poetry and short stories, and grew into a mix of word and image, comprising photos and paintings that I put together from local (Wellington) artists. We had a great collection, but then the realities of life, work, and trying to get an independent publication funded and distributed put all our plans to rest. Urban Driftwood went on the shelf.

In the intervening years, I lost touch with all but a few of the artists and photographers who had contributed work. I even lost touch with one of the writers, Jane. Now and then the project would re-emerge, but other than a redrafting, nothing much ever happened. I was uncomfortable going ahead with the project if I wasn't in touch with the contributors, so after a review and a polish, Urban got saved under a new file name and put aside again.

Last year I discovered Lulu.com. Suddenly, internet-based Publish-On-Demand services had made a project like Urban viable. It came back off the shelf. The only way I could make a go of it now was by working with only the material I had from the people I still had contact with. So we went back, and we cut, with a very large pair of scissors. All the visuals were discarded, other than the cover image, which had been provided by Steve, one of the writers. It was tough, but I had to cut Jane from the writing ensemble.

We generated a new draft, and new covers, and we were a few formatting tweaks away from uploading Urban to Lulu and doing something with it at long last. I even went out and took photos of driftwood, and put out an email poll on the best colour for the cover. 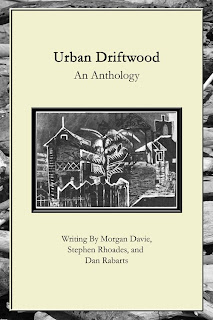 Although we had put together a fairly passable piece of work, I felt that dropping Jane's writing had lost some essential, balancing perspective from the overall concept of Urban Driftwood. This may have been because the other three writers (myself, Morgue, and Steve) are all male, and a female point of view amidst the clamour of angsty young men should never be ignored. Time has a way of moving quickly, though, and its already August. Still we haven't finalised Urban and printed an inaugural run. Was there a reason?

Then by chance I spotted a familiar name on Facebook, and I got excited. I chased that name, and found Jane. The right Jane, no less, and hopefully she's still keen to be a part of the longest surviving project I have on my shelf.

I'm suddenly very excited about Urban Driftwood again!
Posted by Dan at 7:00 AM

It's nice when the internet works. I hope Jane does want to be included and that you manage to get Driftwood out there :)