Here you are, my poor neglected blog!

It seems that between work and family and building playhouses I have had no time at all for keeping this site up-to-date. Considering that the recipe I have here was something I made about 3 weeks ago, that might give you an idea of just how busy I've been. Last weekend DadDad John helped Uncle B and I assemble the frames for the two playhouses, and chopped us up a carload of firewood. I never thought I'd see the day when I was putting my Dad to work for the weekend, instead of the other way round. Such a curious universe.

I also started a Facebook Group called Fans of Urban Driftwood. Inside of a week, this group already has almost 60 members, which is amazing since we've only sold one copy. There are a total of nine copies in existence at time of publishing this post, and since I possess four of those, that's an awful lot of Fans for the remaining five copies. Go Facebook! I'll be registering the newly minted copies with the ISBN to the National Library Archives this week.

We have officially moved Isaac out of his cot and into his big bed. He thinks this is great. I can tell by the way he's banging on the walls in sheer delight. It's going to be a long night.

I rushed around the Hutt River Market today, keenly anticipating swinging by the Lamb Van, only to find that they had sold clean out for the day. Big Ups, Wai-Ora Farm. Stink for us, though. Anyway, since Dessert Chef C had a long night last night and we've got to go out doing family stuff tomorrow for Pretty Penny's birthday, I'd better divulge my top secret Orange-Stuffed Chicken Recipe. It's time like this that I'm glad I make notes!

In a bowl, mix up the following: 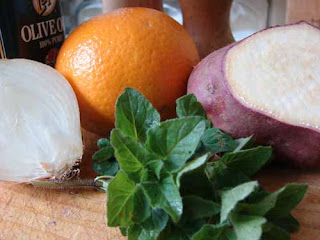 Mix until the ingredients hold together. Stuff the cavity of a whole chicken with the mixture. Truss. 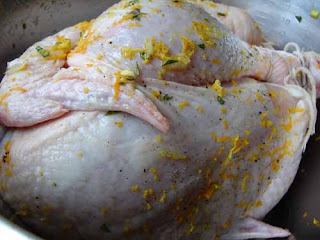 Toss the chicken in Salt and Pepper and the zest from 1/4 of the orange (or more if you want an intense orangey flavour).

In the bottom of your Slow Cooker, pour the juice from the orange, the other half of your onion, chopped, another 1/4 of a chopped kumera, a drizzle of balsamic vinegar and just a light splash of water.

Place the chicken in the slow cooker and turn on High for 5 hours. 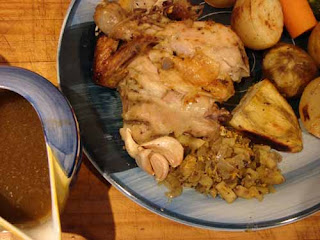 Prepare some roast veges to go with the chicken. When the bird is done, remove for carving (this is hardly necessary as the bones will just fall apart anyway). Strain the fat from the liquid in the bottom of the cooker and blend up what's left, adding chicken stock if necessary, to make a sweet and tangy gravy.
Posted by Dan at 8:37 PM

You make it all look so good!!!

Tonight is the night I'm going to try this recipe. Only I have ducks, not a chicken, so I'll let you know how it turns out.