The Upside of the Economic Downturn

A lot has happened in the last week to keep me away from this blog. What with the election which I have commented on here and elsewhere, and important writing stuff and work stuff and the playhouses and the dog and all, it's been a busy one.

Writing-wise, I have been beavering away on what has probably been the most mature and important thing that I've ever written. After publishing a post on my favourite fantasy author, Hugh Cook, who had just been admitted to a hospice where he was expected to pass away after a long battle with non-Hodgkin's Lymphoma, Cook's family asked that I write his obituary. I was deeply honoured by this request, and put all my energy into doing the absolute best that I could to do Hugh's memory justice.

Hugh passed away peacefully on Saturday morning and was cremated on Monday. The obituary will be printed in the NZ Herald on Saturday the 22nd of November.

Writing this piece has been one of the most mixed-emotion journeys of my life. While I never met Hugh personally, I always felt that I knew him in a way, as a reader can think he knows a writer. Hugh blogged for about 6 years, putting many of his thoughts and ambitions on the internet for his readers to digest, so perhaps it's not such a misplaced feeling. He always made an effort to reply to fans' emails and letters, even in his latter years when his eyesight was failing and writing and reading were both a significant strain for him.

I corresponded on an almost daily basis with Hugh's sister and brother over the past week, and in that time, while they shared details of Hugh's past with me to help flesh out the body of the obituary, I was rewarded with rare and touching insights into this very private man's life. More than once over the course of the week I was brought to the verge of tears by what these people, total strangers, were opening up and offering to me about a man I respect and admire but had never so much as met or even seen from a distance. My own grief for his loss was a strange and distant thing, but one which I will always value, because I was given a chance to give back to him something of the wonderful journeys of imagination that he shared with me and so many other total strangers in his lifetime. Catherine, thank you for giving me this chance. It means more to me than you can imagine.

The 400-word limit which I was given by the Herald was far too short to do Hugh the justice he deserved, so over the next week or two I will write a longer obituary to publish here, on his own blogspot, and wherever else on the net I can find a home for it. Please comment if you have a site and would be willing have a mini-bio for one of NZ's greatest writers published on it.

We got more of the playhouse done on the weekend, and I'll post a photo-journal when it's complete - or at least functional.

Oh, and we got a dog today. 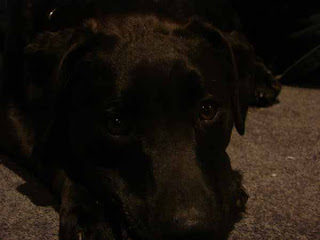 The SPCA ran an adoption day out here on the weekend and we dropped in for a look around. Now we are the proud owners of Lucy, a black labrador cross (not sure what with, but something smaller than a labrador anyway), which everyone is pretty happy about apart from the cat. But she'll come around. Lucy was very excited to see Finn, since she has spent her first 6 months in the SPCA home surrounded by other animals, whereas Finn has been queen of her house for several years now and doesn't take kindly to intruders. I'm sure they'll work it out between them.

Was there some relevance to the title? After all the doom and gloom of the economic meltdown and New Zealand's ill-conceived swing to the Right, can there be any good side? Well, yes. Mainly, my lovely Dessert Chef has rediscovered the wonderful world of baking. 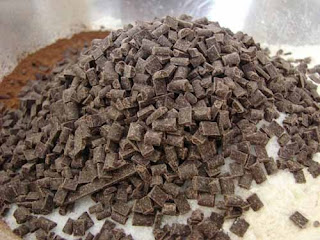 As well as fresh bread, DC has been making muffins. Yum Yum Yum! I've already posted her Crunchy Lemon Muffins, and here are some Chocolate Muffins based on a recipe by Nigella Lawson. 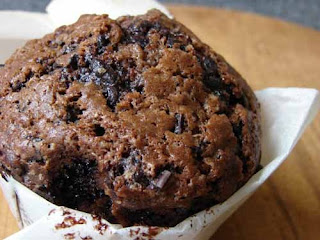 Apaprently she substituted butter for the oil in the recipe, otherwise it's the same. At a time when food prices are climbing and we really can't be sure what's in the stuff we're buying, it makes sense to be making it ourselves if we can. Hooray for home baking!
Posted by Dan at 9:18 PM

Alot of people both in the USA and it seems in your country are turning back to baking from scratch. It tastes batter any way!!! Sorry for your loss, whether you were a reader or not its still a loss and congrats on the new dog!

Do you have another pic of the dog?

LBS: No, its the only photo I took of her, specially to post here. Now she's gone so that's the only we'll ever have. Lucky we weren't attached, eh.